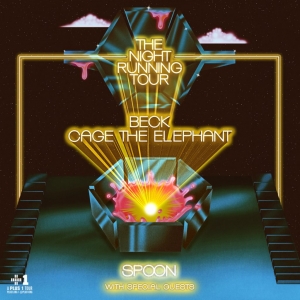 Remember when the alternative gods Cage the Elephant and Beck collaborated and gave us “Night Running”? Honestly, who could forget?

Well, the music video for the psychedelic track came out Friday (May 3) and it’s just as trippy as the song. Matt Shultz (lead singer of Cage the Elephant) and Beck take turns on-screen in a neon digital world that gives off major ‘80s vibes.

Director Jennifer Juniper Stratford stated in a press release that she sought to “create a realm where a super computer that hosts a simulation program that creates a series artificial worlds.” Stratford also explained the plot of the video, stating “Beck would appear to live within the software as a master control, while Matt [Shultz] would be transported to different worlds and new identities, leaving him to question what is real.”

They are also co-headlining a tour this summer. See dates below.

Watch the video below and go see their co-headlining tour this summer!